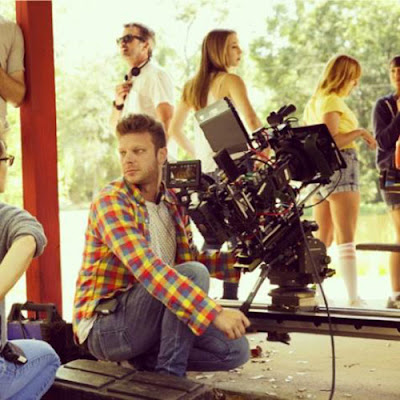 The Final Girls is set to close the 2015 Midnight Madness program. The film is full on rollercoaster ride. Full of laughter, chills, thrills nostalgia. The film that Todd Strauss-Schulson directed is a perfect way to close out the midnight screenings at our beloved Ryerson Theater. I recently had the opportunity to talk to Todd about making the film. -- Robert A. Mitchell

When you first read the screenplay written by M.A. Fortin and Joshua John Miller what attracted you to the story and made you say I want to direct this movie?

It touched me. I was immediately stuck by the heart and how full of feeling it was. To me it was always a movie about a girl who got a second chance to be with her dead mother. To see her again, to have one more day…

A few weeks before I made my first movie my Dad died. He was my best friend, and he was so supportive of my filmmaking, and he died, he missed me booking that job by a matter of weeks. So that was difficult. And while I was working on my first movie, I would dream about him all the time. I still do. Happy dreams where were riding around on a bus through new york, or eating pizza and strolling around the lower east side… my father would visit me in my dreams… and that is what Final Girls is to me. That is what I saw in the script. The reverbs of grief and that wish to get another day. And Max (Taissa Farmiga) gets this second chance to see her Mom in this 80’s horror movie… which we made feel almost like a dream. It’s consciously hyper real and ethereally beautiful. And really, the idea of the horror movie was very much consciously linked to the emotional concept… I loved the clever idea of a story about the emotional aftermath of a death in the middle of a genre that doesn’t take death very seriously… in fact a genre where big bigger the body count the more fun… so we’re USING genre to tell that emotional story… not the other way around.

The secondary thing that really attracted me was, as a movie lover… and I LOVE movies … the big fun conceit of getting stuck IN A MOVIE. That’s just a delightful idea. And the opportunity to deconstruct a movie, to almost turn the movie into an antagonist. It lent itself to a lot of visual playfulness and stylistic flamboyance and comedy. And I really felt this could give me an opportunity to flex some of those cinematic muscles in a way that was integrated with story. I really love when a film can perform WITH the actors, its not just a capture medium... it’s a performance medium too. And Final Girls really lent itself to that kind of filmmaking.

So, tons of heart, a very personal story, and this really fun cool container was what appealed to me… its almost like All That Jazz, a personal story about death and humanity in the body of a delightful musical full of pizzaz and showmanship. I loved that tonal mash up. 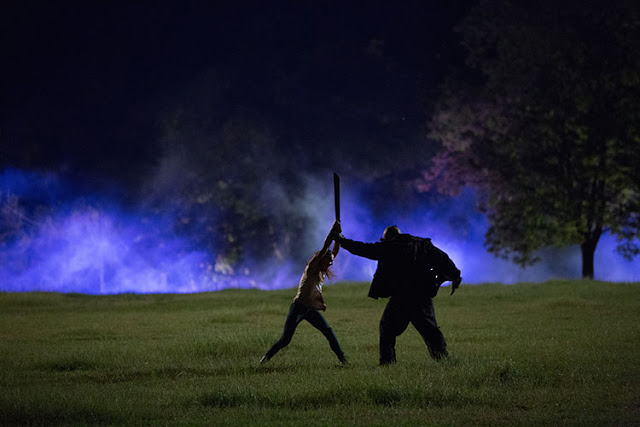 Final Girls blends horror and comedy. Was it difficult to strike a balance between these two elements?

I look for movies where the telling of the story is as integral as the story itself. People have been saying to me for years that Final Girls has a tough tone to pull of... but I just never saw it that way... I think if you're doing your job, and telling your story, and telling it in your own voice, you can kinda go anywhere and do anything. The movies that I love the most are the ones that are tonally all over the place. And that's true to life...  The best stories a friend can tell are the ones that start off where a happy thing happened, and then a horrible thing happened; then this person saw someone get their purse stolen, but then you ate a delicious scone at a new coffee shop and saw an old family friend out of the blue who is really beautiful... but then they told you their cat has diabetes...and then you wonder if dating them is gonna be too intense cause you're gonna have to deal with that cat all the time so you get anxiety... It's what any random day in your life is like, it's tonally and emotionally all over the place. Its funny, its sad, its scary, its beautiful, its lonely...

I remember being a kid and my mom took me to see Spalding Grey do a live monologue at Lincoln Center, and he talked for three hours. Just sat and talked on an empty stage and it was as riveting as any movie. He did the craziest tonal shifts, I felt every emotion, I went with it, I was connected, because he was so sure and steady about what he was saying and how he was saying it, he would go fast, then slow, he would go on a weird tangent that seemed to meander, then race back to the point...it all held together. One of the reasons why Final Girls is so flamboyantly visually stylish, the colors, the set design...and what the camera is doing... it's not subtle,  But a lot of that is in service to hold these disparate tones together, the horror, comedy, heart, magic, weirdness... To feel that strong hand of a storyteller, to have the specific cadence to the storytelling, of me telling the story and pushing you ahead. It's what my favorite movies do: What Kill Bill does, what Magnolia does, what One From The Heart, Hudsucker Proxy, and Obsession do... 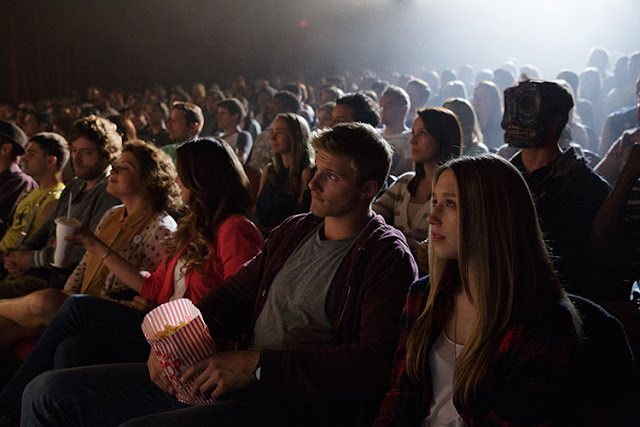 This film features a large ensemble cast, what was the casting process like?

I really wanted to be able to feel the TONE of the movie in the casting The tone is wild, it’s a comedy, its scary, its cool, it’s a melodrama… and I wanted you to feel that when you looked at the ensemble. So you have Adam and Thomas and Alia and Angela who are bringing a lot of the comedy, you know them from comedy. But then you also have at the center Taissa who is such a wonderful and grounded actor. She has such fragility, such a grounded and raw emotion… and she tethers the movie. And then you pair her with Malin who is a terrific actor. She’s really able to do the comedy, but she also has this incredible depth of emotion. I loved her in Happythankyoumoreplease.

It was about putting together a group of young and talented actors who could all be friends. Who I wanted to go to camp with. and they would be campers and I was head counselor. And they all ended up almost perfectly falling into their dynamics as we were shooting, we became a family out there. It was the best experience ever. 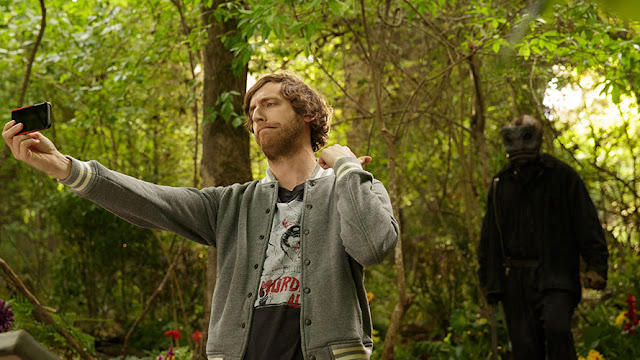 You and your team were shooting as many as fifty shots in a day. How did you keep up the focus and energy of the cast, crew and yourself?

I think enthusiasm is the key. Being a fan. Of other people and also of your own ideas. Especially if you’re trying to do something special or different you kinda have to convince a lot of people that these things you want to do are gonna be great!
Ambition is my favorite quality in a movie, I really hate when a movie isn’t trying to do anything new or special. And I think people can feel that. I think people galvanize around that kinda enthusiasm and ambition. It’s exciting to be working on a movie that is trying to be disruptive and do something new… tonally or visually…

I always love when I'll meet a person and when I’m around them I feel so interesting, so smart, so funny, they somehow bring out the best in me. They are interested, and kind, and able to make me feel instantly comfortable… I try to be that for other people. I want to bring out the best in everyone around me and make it feel the way it felt for me when I was 14 making movies in my living room with my sister. There is a cool Lorne Michaels idea that has been coursing through SNL for years that the sketches are really designed to let the hosts “score”. I love that. That you are really creating opportunities for the people around you to score. When I read the script I thought I could score with this movie. I thought my dp Elie could score, I thought Katie Byron our intrepid production designer could score… Taissa and Malin could score in their goodbye scenes, Nina on that dock has this big moment to score… Greg our composer gets to play around with this crazy music and score… I just loved giving these amazingly talented people around me these big challenging things to pull off so that they could score. I think that is an infectious vibe on set and it gets people to give you their best. 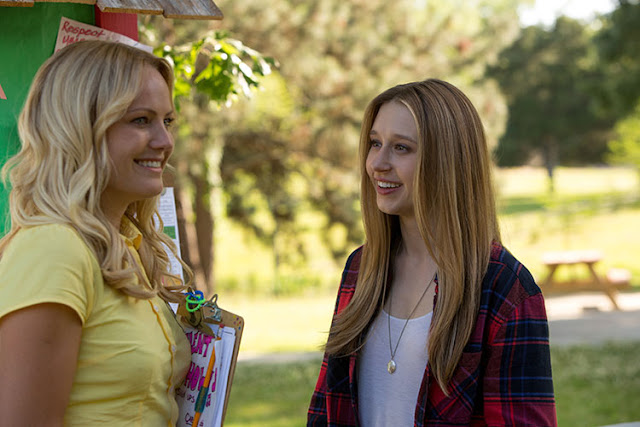 Final Girls is roller coaster ride and really taps into the joy of movies. What does cinema mean to you? What cinematic experience awaits the Midnight Madness audiences?

Final Girls is the kinda movie I personally love. Its ALL the feelings. ALL OF THEM. You’ll laugh, you’ll cry, you’ll get scared, you’ll feel nostalgic, you’ll be dazzled by how pretty it is, how weird it is,  it’s fucking BADASS, you’ll cheer, you’ll yell at the screen, you’ll see things in this movie you haven’t seen before… it’s the full range of human emotion!!!

I think you should walk out of a movie feeling better than you did going in. I think we go to movies looking for a human experience, and I think you want to laugh and cry and in some kinda subconscious way, touch that tender part of you that gets cemented up throughout the day with irony and anxiety and sarcasm and fear and just endless thinking… I think what a movie can do almost better than anything else is connect you back to yourself,  to make you feel a little more connected and empathetic. I think if they are working, movies can be an antidote to the rest of your life. I think that's what they're capable of… I don’t go to movies to “escape” my life, I go to reconnect to it.